The End Of the World As I Know It 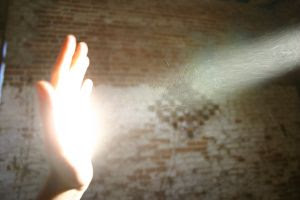 A friend once told me that while she was having an impassioned conversation, a beam of light shot out through the top of her head, astonishing those around her.

I did not doubt this story for a second. This friend moves through the world the way birds fly in the sky: joyful, free, and fearless. She trusts her inner-voice and makes decisions based on how they feel in her body, not on how they may be perceived by other people. She possesses that rare kind of knowledge that is usually reserved for elderly folks who have lived remarkable lives and acquired wrinkles and wisdom along the way.

If any of my friends were to have a beam of light shoot out of the top of their head, it would be her.

I remember the night she told me this story. It was back in 2008 and we were both working at the tea shop. We had just finished our closing duties and were reluctant to go home. We talked and laughed and confessed. Our discussion touched upon the menial details of our day-to-day existence and grew to incorporate the cosmos.

I went home feeling deeply connected to this friend, to the planet, and to the entire world. Although my own spiritual journey had begun years earlier, I suddenly felt an urgent need to renew my commitment to it.

I had already started breaking old consumerist patterns and was working on simplifying my life. I was surrounding myself with people who shared similar beliefs and whose experiences and insights propelled me further on my quest. I was noticing gaps in the carefully orchestrated order of things and was aware of the Otherness that permeates the physical realm. I was reading books about transformation and ways to escape the ego’s grasp. I was traveling the path of awakening and feeling the seeds inside my heart start to sprout.

But I had never had a beam of light shoot out of the top of my head.

I had never come that close to converging with the Light. I had never experienced such a powerful and glaringly obvious connection with the realm of Spirit.

My experiences were more like whispers carried in the breeze or specks of sunlight piercing through my early-morning dreams. They were beautiful, but brief. I knew they were there and I knew they were real, but I longed for more. It was not Nirvana that I longed for, but simply some kind of confirmation that I was indeed sprouting and grasping some fragments of Truth.

I knew that I was - just by the way I felt in the world and by the synchronicities that kept seeping into my reality. I just wanted to know it more. I wanted to be one of those people who are unshakeable in their beliefs because they have experienced something extraordinary. I wanted to touch the untouchable.

So I continued on my quest, hoping that someday, somehow, soon, something would happen. I listened with rapture when people shared stories of enlightenment and I anxiously waited for my moment, my beam of light.

It did not come.

The whispers and the specks of sunlight still came. I still saw the beauty and felt a sublime presence guiding me on my path, but I did not feel as though I was growing. I was at a standstill, spiritually speaking. I wondered if I had reached my plateau.

But there was something in me - a push I simply could not ignore. A voice that kept telling me that there was more. That I wasn’t crazy. That I needed to be brave and do the thing that scared me.

What scared me was leaving my job and returning to school, at my age, to embark on a whole new voyage.

But I didn’t want to be quiet, and neither did the voice inside my heart. There was more and I was getting closer and closer to dancing with the divine.

So I applied to a school I felt a deep connection to. I got accepted-paid tuition-left my job-and never looked back. Things happened that quickly and, before I knew it, the push that had propelled me forward grew into a force, a flame, and then I was flying. Flying so high and so free and seeing my reality from a newfound angle.

I had made the right decision. I knew it in my bones, in my blood, in my flesh, in the surrender that occurs between every beat of my heart. I knew it the way birds know how to build nests, the way newborn babies know how to reach for their mother’s breast.

When I found out that there was a mandatory weekend workshop last weekend, it is this knowing that gave me the energy to not only attend the workshop, but to show up alert and open to whatever lesson or message I was meant to hear.

I had no expectations. I was not searching for illumination or hoping to reach some great understanding. In fact, had I been given the choice to attend the workshop or not, I probably wouldn’t have. I would have stayed home, caught up on some much-needed sleep and studied for two upcoming tests.

But I was not given that choice, so there I was. In that room. With those people. Listening to that teacher - a teacher bright-eyed in her bliss.

Words were spoken and I felt the shift immediately, but it was subtle at first - a nearly imperceptible flutter in my chest. I looked around: Had they felt it too? No. This was me. “This” - this unnameable, untouchable flutter of recognition - was happening to me. Things started coming together really quickly - moments, memories, faces, feelings, times, places. I felt the seeds sprout, the sprouts bloom, the cosmic dots connect, line up, and encircle the entirety of my existence in one fell swoop and I scribbled on my piece of paper: Oh my God.

I lived with this flutter for the duration of the weekend, knowing I was on the brink of something extraordinary and feeling intimately cradled in the arms of the universe. The teacher spoke and I felt her voice resonating in the inlets of my heart, shifting the axis of my being in a way it had never shifted before. I do not use the word shift metaphorically. I felt a moving, a sliding, an unblocking taking place in my core. I stepped out of class, on Sunday evening, and was unsteady on my feet, as though my body was adjusting to my new internal constitution. I told my classmates: “I feel weird right now.”

After a few hours of putting aside the experience in order to study for the next day’s test, I walked home as fast as I could, burst through the door, hugged my guy in a way I hadn’t hugged him in a long time, and started to talk. Using the languages I know I did my best to explain the feelings, the realizations, the magic of the weekend. I looked into his eyes as I spoke, half expecting him to laugh it all off, to say, “That’s great Vic. What do you want for dinner?” But he didn’t laugh and he didn’t interrupt and he didn’t change the subject. He was right there, with me, goosebumps on his arms, aware that something special had taken place.

Maybe this lifting of the veil really is upon us. Maybe these 2012 prophecies are indeed telling us that we are on the brink of a great revelation, a new sort of existence - the next crucial step in the evolution of mankind. As someone who studies traditional healing, I have tremendous respect for our ancestors, for the pieces of information they left behind. It is foolish not to take their messages seriously; we must expand our narrow-minded idea of the world and embrace their wisdom.

It was after our sharing - after he had fallen asleep and I felt completely emptied - that the flutter in my chest began to flourish. This flutter, which had spoken to me all weekend and guided me through a series of transformative moments, wasn’t done just yet.

It grew. It became a thump against my ribcage, a pounding in my head, a warmth that spread like a star from my centre to my extremities. I laid down in my bed, breathed, and acknowledged the phenomenon taking place inside my body.

It became noisy - like a wailing wind. It went from warm to hot and filled my body with fire - when I closed my eyes, I saw red. It started buzzing, the way bees buzz in the middle of summer. The buzzing started in my head and then, like an electrical current, whizzed round and round my body, never ending nor beginning, just moving in me and through me, up and down my spine, below the surface of my skin, fast and burning and electrifying. I thought I might spontaneously combust.

The buzzing continued until six in the morning when, finally, it faded. My heart rate returned to normal. My skin cooled. I closed my eyes and the red was gone. I slept.

I woke a few hours later with more questions than answers: What does it all mean? And where do I go from here?

I am still processing the experience and figuring out how to best utilize the knowledge I acquired over the weekend. It is knowledge I am keeping close to my heart, insights I do not feel ready to share.

But what I can share - and have shared in this lengthy piece of writing - is that it is not by desperately searching for Spirit that one encounters it, but by letting go of fear, by surrendering to the voice of Truth that comes from within, by opening our hearts, honouring our own odysseys, and noticing the small things which are, in fact, incredibly big.

Longing for spontaneous transformation is futile. The spiritual journey is made rich by the very act of journeying. The cracks and crevices in the road, the things that scare us the most, the people who challenge us - these are the things that move us forward and inward, towards greater understanding. The parts of ourselves we think of as weak or broken or less-than-perfect are those parts that offer the most significant gifts, the most amazing opportunities for growth.

I have not reached Enlightenment, nor do I claim to possesses divine wisdom. But I have heard my name called - heard it loudly and clearly - from a place other than the here and now. I have scratched the surface of my own ethereal soul and, though I have not had a beam of light shoot out of the top of my head, I have felt a fire buzzing through my body.

The Mayans were on to something. The veil is indeed lifting.