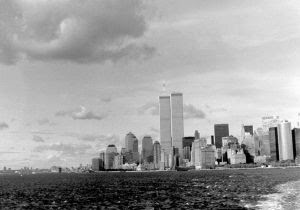 Ten years ago, I was taking my first steps as an adult - living in Kingston, minutes away from the university campus and hours away from the scrutinizing eyes of my parents. Life was exciting and confusing and mysterious and good. The ground I stood on was solid – not always rock-solid, but never soft enough for me to sink past my ankles or my knees. These hard yet beautiful days of newfound freedom and self-governance would not cause me to suffocate on my own inexperience. These were days of big discoveries, small disasters, and bottles of cheap wine drunk too fast and too often.

Ten years ago, I was not unaware of suffering. I knew of war and racism and cruelty and poverty. I acted in plays that raised awareness about abuse and rape and I spoke to high school students about the dangers of bullying. I did not exist in a bubble of denial; in fact, I was intimately drawn to those who suffered the most and felt a pressing urge to try to make things better for them.

Ten years ago, I knew that the world was not a safe place, but I firmly believed that as long as I kept both feet firmly planted on the ground, life would support me, protect me, and keep me standing upright. I would be OK. At the end of the day, no matter the circumstances, we would all be OK. Although dangers lurked around some corners, most corners had no secrets, hid no hazards, and provided shelter from the storm.

Ten years ago, on this very day, I changed. Everyone changed, I think, but I cannot speak for everyone, nor do I wish to. I can only speak for myself - my 20 year-old self, walking down the steps of the administration building at Queen’s University, and coming face-to-face with Mike, my friend and housemate, who responded to my casual “Hey! How’s it going?” with words I will always remember: “Terrorists attacked New York City! The twin towers are falling!”

Ten years ago, I stood on those steps, books clutched in my arms, and heard sounds tumbling out of Mike’s mouth as though launched by a forceful inner propeller: planes, crash, dead, war. He was speaking fast and his eyes were wild and, though I was unable to make sense of all I was hearing, I knew that the world I lived in had suddenly, unexpectedly, shifted. It was an eerie sort of knowing – the kind that relies not on logic, but instead comes from an icy trickle that travels up and down the spine, a spark ignited in the psyche.

Ten years ago, I walked to class feeling strangely unsteady, as though the solid ground I had grown so accustomed to had suddenly ruptured, producing gaps big enough to swallow me whole, and the rest of the world with me. I walked fast, eager to step into the familiar classroom of English 223: Selected Women Writers, eager to take my seat, pull out my notebook, and resume life as usual. Life as usual was gone - I sensed this acutely - but I was hoping for one more hour of regular class time, one more hour of easy banter about Anne Sexton's poetry.

Ten years ago, students poured into English class with shock and fear smeared all over their faces, like lipstick marks left over from a messy party the night before. There was chattering and gasping and cries of disbelief and those students from New York ran out of the room before class even started. Our teacher arrived, self-assured and unruffled, and greeted us with a smile. As she was about to begin her lecture a fellow student stood up and said, “I don’t know if you know this, but New York City was attacked this morning.” As I watched our teacher's expression transform from one of confidence to one of absolute bewilderment, I knew she was feeling the exact same way I had felt only moments before, the exact same way we were all feeling on this warm September morning. The solid ground she stood on split before our very eyes.

Ten years ago, class was dismissed and pubs were quickly filled with anxious students, teachers, and administrators drowning their panic in pints of beer and fixing their eyes on the television screens. The images were horrific, yet we could not look away.

Ten years ago, I walked home, traumatized by the scenes on TV, heartbroken for the victims and their families, no longer feeling free or safe at all. I had a desperate urge to call the people I loved and tell them that I loved them. I felt very much like a child in need of hearing my Mom’s reassuring voice telling me that all would be OK. That night, before bed, I wrote in my journal: Today the world became a scary place.

Scary things had happened before. There had been wars and atrocious acts committed against innocent people and genocides and holocausts and terrorist attacks much worse, casualty-wise, than these attacks on New York City. But I had either not been born or not been old enough to understand these events. Not that I “understood” these attacks either, but I felt them – I felt their impact rippling through the very bedrock of humanity.

Ten years ago, a line was drawn in the sand of my existence: on one side, my childhood and teenage years (pre-9/11); on the other side, my life as an adult (post-9/11). No matter how strong the wind blows or how high the tide rises, this line will neither dissolve nor be washed away. It is weaved into the tapestry of life itself, embedded in the collective unconscious, and imprinted in the lines on the palms of my hands. The attacks on 9/11, and the events that followed, continue to permeate our days, to influence the media, to infiltrate our sense of identity, to worm their way into various ideologies, and to transform our lexicon. It is impossible to go back. It is impossible even to imagine a world without 9/11. The cracks and fissures run too deep.

Ten years ago, I felt a sadness of the sort I had not felt before. It was a sadness that rose not from my own heart alone, but from the shattered hearts of many - an ache so full of loss and despair, I had to ignore it for fear of being submerged within it. It was a sadness surrounded by lies and corruption, by a deep-seated feeling that there was much we did not yet know, that there were truths in the rubble we did not yet have the strength to see.

Ten years ago, the towers fell, the ground shifted, the line was drawn, and I grew up.

Today, newspapers around the globe are publishing pieces about 9/11 – re-hashing the events of the day, making political statements, pointing fingers in various directions, demanding answers for mistakes made, and asking the two most important questions: What have we learned? and Where do we go from here?

What have we learned? It is better, I think, to answer this question individually, as the lessons learned by one may not have been learned by another. There are still those who believe that retribution is the only way up and out of the hole 9/11 threw us in. Those who cling to anger and spend their days plotting schemes of retaliation. Those who have learned nothing but the empty satisfaction that comes from making “them” pay – the elusive “them” that has changed again and again over the years. The elusive "them" that, in fact, is much closer to the elusive "us" than some wish to acknowledge.

Where do we go from here? As far as I can tell, there is only one reasonable answer to this question, only one path that leads away from heartache and pain towards the light of a brand new day. There is only one word strong enough, big enough, and true enough to give us the courage to dust ourselves off and regain our balance. There is only one direction in which to walk, heads held high, allied hearts beating our collective commitment to carry on in spite of the crevices in the road and our uneven gait.

Love, my friends, is the only real way out of this decade-long mess.

Ten years ago, an event took place that left us shaken and afraid. But we are still here, we are still breathing, the gaps in the ground have yet to swallow us up.

We cannot erase the day that was, unsee those innocent people jumping to their deaths, unbreak those hearts that were ripped open, or undo those betrayals inflicted by people of power, people we naively thought we could trust. But we can choose not to be a pawn in their game, not to be a puppet in their macabre spectacle. We can choose not to let fear render us stagnant, not to let rage turn our hearts black. We can choose to get up in the morning and do our very best, whatever that best may be.

We can open our eyes and be grateful for the dawn. We can reach for our partner’s hand and squeeze it, sharing an intimate moment of tenderness without even saying a word. We can smile at strangers and watch them smile back, the twinkle in their eye reminding us of the inner child that still resides within us all. We can appreciate the family and the friends that grace our lives and we can listen to them when they need to talk. We can be shoulders for each other – to carry each other’s burdens, support each other’s labors, and catch each other’s tears.

Ten years ago, the fabric of our lives unraveled into a twisted, muddled knot. We can untangle the knot with every thought we think, word we speak, and deed we do. We can refuse to buy into the reward of revenge and choose, instead, to direct our energies towards healing and growth. We can expand our consciousness in a way that allows us to embrace the entire world. We can expand our capacity for kindness in a way that allows us to give selflessly and expect nothing in return. We can teach our children about tolerance and compassion by living lives that radiate those very qualities. We can speak out against corruption and lies and be the voice of reason in a world gone awry. We can honour each other, respect our differences, and marvel at our shared human experience.